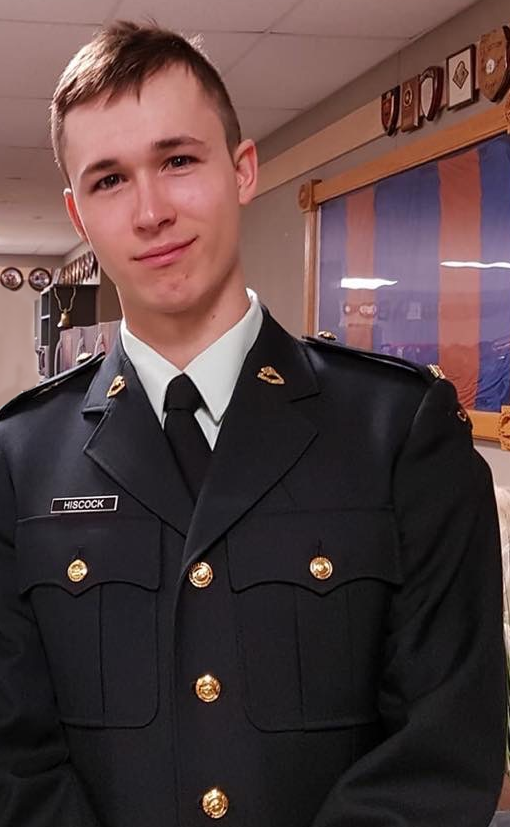 It is with the deepest of sorrows that we, the family of Pte. Tyler Glenn Hiscock, share with you the passing of our dear, beloved soldier. After a long but courageous battle with mental health issues, Tyler left our world by his own hand late in the evening of Wednesday, October 30.

Born in Glace Bay on March 13, 1995, Tyler stole the hearts of all his family members with his bright, blonde hair and his beautiful blue eyes. Growing up, his happy and fun-loving—albeit, rascally—personality was addictive, and the people he chose to be a part of his world were happier just by having him around. Tyler was a fierce and loyal friend. Those close to him will attest that he would never be far from their side when they were in need. It seemed almost fitting that this desire to help others would lead him to join the military.

In 2016, Tyler followed in the footsteps of his family members and joined the Canadian Forces. Enrolled as a combat engineer, Sapper Hiscock was posted to CFB Gagetown with the 4th Engineer Support Regiment. He was a proud soldier who loved his job, respected his brothers- and sisters-in-arms, and took great joy in “blowing s**t up!” The only thing that could top the pride he felt for his uniform and country was the love and honor he felt for his precious son.

Tyler is survived by his wife Melissa and his infant son Grayson; his parents, Gary and Shirley Hiscock; his sisters and brothers Angel (Jonathon), Gary (Tammy), Crystal, David, and Wendy (Alex); and his nieces and nephews Garrett, Alora, Braeden, Jeremy, Gabrielle, Brooklynn, Logan, Ava, and Nikolas.

Cremation of Tyler’s body has already taken place. A visitation will be held from 12-2 p.m. with a  memorial service to follow at 2:00 p.m. on Tuesday, November 12, 2019 at T.J. Tracey Cremation and Burial Specialists, 370 Reserve Street in Glace Bay NS (902-849-4199).A reception will follow in the funeral home.  In lieu of flowers, the family would welcome a donation to either The Canadian Mental Health Association in his honor, or to the education fund set up for his son by fellow service members.

Expressions of sympathy may be sent to the family by visiting www.tjtracey.com.

There will be a reception following the service in the reception area of the funeral home.

Share Your Memory of
Tyler
Upload Your Memory View All Memories
Be the first to upload a memory!
Share A Memory
Send Flowers