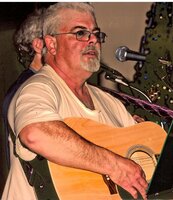 Dennis Everett Smith passed away peacefully at Northwood Halifax Campus on November 16, 2022. He was born in Halifax on May 1, 1953, raised in Seabright, and was the only son of the late Carrie (MacDonald) and Karl Smith. Dennis will always be remembered by family and friends as a musician who loved to sing and play wherever he went with his guitar. He played in various bands during his musical career but will be remembered most for the wonderful gatherings at Carrie and Karl’s home during special occasions and holidays where he usually played and sang with his beloved uncle Jack MacDonald and his sisters. He started his working life at Dominion Stores in the meat dept. but soon transitioned to construction work - installing windows in many downtown Halifax buildings for much of his career. Later in life, as his health permitted, he worked at Stone Hearth Bakery and as a Crossing Guard. He particularly enjoyed the latter because he got to spend so much time with the young children whom he adored. Most people with remember Dennis as a friendly and talkative man with a ready smile. Many of his family and friends where recipients of telephone calls at odd hours of the day or night when he just wanted to chat and catch up on news. He was also an avid hockey fan – always rooting for the Montreal Canadians or Toronto Maple Leafs. Baseball came in 2nd place to hockey, but he always rooted for the Blue Jays. Dennis is survived by his beloved daughter, Nicole Dawn (Darren Young); three granddaughters, Jasmine, Leah and Isabella; and stepson, Jeffrey. He is also survived by his sister, Dorothy (Wayne Matthews); special aunt, Patsy MacDonald Boutilier; and cousin, Chris MacDonald who he fondly called Ozzie. Cousins on both the Smith and MacDonald sides of the family will also fondly remember Dennis. He will also be missed by his long-time friend, Karen Singer who was instrumental in assisting the family with his care for many years. He was predeceased by his parents; and by his sister, Valerie Smith. The family would like to extend our sincerest gratitude to Roger Currie, Barb Kaiser, and the amazing staff of the 5th floor at Northwood for the compassion and kindness they extended to Dennis while he was in their care. Cremation has taken place and arrangements have been entrusted to T.J. Tracey Cremation and Burial Specialists. A Celebration of Life service is planned for a later date. Memorial donations may be made to the Canadian Mental Health Association of Nova Scotia or to the Northwood Foundation.