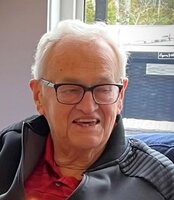 On a bitterly cold day in the winter of 1948, 8-year-old Ben Bates was pulled from the frigid water of a pond where he had broken through the ice. He was suffering from severe hypothermia. He was alive only because the fur on his collar froze against the ice, keeping him from slipping down into the icy black. His brother had run for help from a nearby house, and the male nurse who lived there carried Ben back to shelter and warmed him with a generous toddy of hot rum and a blazing fire. For this heroic gesture, Ben would make restitution to the world many times over. Most significantly, in August of 1986, in the wake of Hurricane Charlie, Ben found himself looking out over the turbulent waves at Kennington Cove, only a few kilometers from where he had been plucked from the water 38 years earlier just outside Louisbourg, Nova Scotia. Disregarding their own peril, Ben and David Lovett, Michael Thompson, and Robert Canova crossed the beach and waded into the churning water to assist three young men who had become exhausted while swimming and couldn’t make it back to shore. Entangled by seaweed and besieged by pounding surf, the three swimmers and three of the four rescuers made it back to shore. Michael drowned trying to provide help. For their efforts, on September 25, 1987, Ben, David, Robert and Michael (posthumously) were awarded the Governor General’s Medal of Bravery. Ben then made it his cause to have lifesaving gear equipped at beaches throughout Nova Scotia. Frustrated by inaction by his municipal councillor, the next year he stepped forward for public office, beating the incumbent in District 7 by 6 votes. He would go on to serve the people of Dartmouth for two terms. Ben was a banker, starting his career with the Royal Bank of Canada. His kindness, bravery, intelligence, and humour lifted him to executive suites with the National Bank of Canada, GE Capitol and ABN Amro, going on to earn a gold medal from the Institute of Canadian Bankers. He wanted to give back to his community and in addition to his public service on the County Council, he sat on the board of the Dartmouth General Hospital and played a key role in the expansion of Cole Harbour Place. Ben was born and raised in Louisbourg, Cape Breton. The son of Paul and Jenny Bates, brother to Winfred, Mary, Johnny, Jeanette, and Paul. He chose to raise his family in Cole Harbour. Ben and his wife Mary went on to see his daughter Sheri, and sons Allan and Sean raise families of their own. He delighted in the company of his extended families, their children, grandchildren, and great-grandchildren (at last count numbering 17 and counting). His love of golf was legendary but perhaps most important was his love of music. His guitar sat proudly as a centrepiece of his room, and in the later stages of his life he continued to entertain family, friends, and caregivers with renditions of his own compositions and of those of his favorite, Tom T. Hall. The band in heaven got a little better with Ben’s passing. In the words of Tom T “I know there's a lotta big preachers that know a lot more than I do, but it could be that the good lord likes a little pickin' too.” A Celebration of Life will be held in August