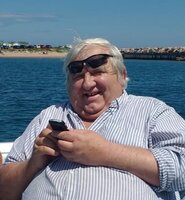 Kenneth “Kenny” Gerard Turnbull, 70 Glace Bay/Ingonish Beach, NS We are shocked and devastated to announce the sudden passing of our Dear Father, Kenneth Gerard Turnbull. Dad passed on April 21st, 2022. He was 70 years old. Kenny was predeceased by his youngest son Jordan Turnbull, his loving wife Yvonne (Shelley) Turnbull, his mother and father Jim and Jessie (MacLean) Turnbull, sisters, Loretta, Mary, Anne and Jeanette, and a brother Eddie. He leaves behind a large family; his children: Richard Turnbull, John (Wanda) Turnbull, Jason (Cathy) Turnbull, Kyle (Ashley) Turnbull, Holly (Darren) White, Tara (Jason) Williams; grandchildren: Jeremy, James, Neil, Taylor, Rayne, Summer, Jason, Breton, Parker, Harvey, Kyle, Kenzie, Kendall, Korey, Aiden and Fox; sisters: Margie, Myrtle, Thelma, Grace, Cindy and Colleen; brothers: John Neil & Billy. How do you sum up the life of someone as beloved as Kenny Turnbull? Everyone who met our father not only loved him, but they also remembered him. He had a way of making everyone he spoke to feel special. Born and raised in Glace Bay, Dad was the son of a coal miner. That heritage ran deep in his veins, and he often reminisced about his younger days, when he had to be very crafty to make a buck. He would give a saucy grin as he shared stories about his past – Like all the times he and his brother would sneakily sell the same single bag of coal to half the neighborhood; or the time spent raiding the neighborhood gardens – He just loved being bad. Dad was a proud volunteer. He loved helping out at the KOC, Meals on Wheels, the Special Olympics - and the list goes on. He enjoyed lending a hand wherever needed. Kenny was a passionate union man. He enjoyed a lengthy career with Municipal Ready Mix where he worked construction. We will never forget the Moxham Court incident, and we promise to continue sharing stories of exactly what it meant to be a union man in the 90’s. Dad was infamous, and his legacy will certainly live on. Dad never regretted taking an early retirement. “Life’s too short,” he would say. “Take the day off, spend it with family, leave work early any chance you get!” He never complained and was always grateful for everything he had. Later in life, when our mom had passed, Dad found the time lonely. This eventually led to the most surprising hobby – Our Dad became a painter! He produced lots and lots of beautiful folk art, and many individuals treasure his paintings to this day! Dad made a point of letting us know what he was most proud of in his life; without question, his wife and children were his life’s greatest accomplishments, and we are what he was most proud of in this world. We would like to make special mention of Dad’s twin sister Margie, with whom he shared a special bond. Dad showed great love for his brothers and sisters and was fortunate to come from such a close-knit family. We cannot leave out Danny Moffat – His lifelong friend and partner in crime. He loved you, Danny! And of course, his buddies from the KOC. He always looked forward to Wednesday nights playing pool and Tarabish. Rest easy Dad, and remember, “Locks are only meant to keep honest people out,” so go give heaven some hell! Service arrangements have been entrusted to the care and compassion of T.J. Tracey Cremation and Burial Specialists, 370 Reserve St., Glace Bay. 902-849-4199. Visitation for Kenny will be on Thursday, April 28, 2022, from 3-4 p.m. with a Celebration of Life to follow with Fr. Norman MacPhee presiding. Reception to follow in lower level of Funeral Home. In lieu of flowers, we ask everyone who loved Kenny to consider donating blood, dad never missed an opportunity to donate and was proud to have reached one hundred units given. Words of comfort may be expressed to Kenny’s family by visiting www.tjtracey.com.