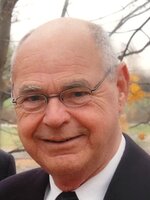 81 of Dartmouth passed away peacefully surrounded by his family on Saturday, February 26 in the Infirmary site of the QEII Health Sciences Center in Halifax. David is survived by his wife and love of his life, Beverley (Garrison). They were married for nearly 55 years. He is also survived by his daughter, Jennifer (Michael Whelan) of Waldorf, Maryland; son, John, of Dartmouth; grandson, Logan of Lawrencetown; step grandson, Kyle Whelan of Myrtle Beach, South Carolina, and many extended family members. David was predeceased by his parents, Gladys and Raymond Conrod; and stepfather, Ranald Bitcon. David was a devoted family man and friend. Although a quiet guy, David proudly chatted about Jennifer’s successful career with Hilton Hotels. He was equally proud of John’s success as a flight dispatcher with Jazz Air. And, his eyes lit up when Logan’s name came up on school or any subject but especially hockey and lacrosse. After David graduated from St. Mary’s High School which, at the time, was then part of SMU, he spent two years completing a surveyor’s program. Soon after, he embarked on a career with the Federal Government and its water quality services. It took him to other parts of Canada including the Arctic. After retirement, David accepted a contract collecting water samples on First Nation Reserves. Besides Beverley, his children and grandson, David had other passions. He’d quickly open up about a couple of muscle cars he owned as young man, fishing and hunting experiences with family and friends or his 1962 trip to New York to see the All-star Baseball game and where he saw Peter, Paul and Mary in Greenwich Village. NASCAR was a passion that he infected the whole family with and so was hockey. He was so involved helping John with his hockey pursuits, David became Zone Chairman of Central Minor Hockey in Hockey Nova Scotia. Later in life, David became a member of the Austenville Owl’s Club, Dartmouth. It’s where you’d find him on Friday nights and special club events. David loved news and history, a good story and a cold beer. When the TV was on, and it usually was, it was on a news or sports channel. He didn’t miss much. The family would like to thank all those who cared for David in his final days; Emergency Medical Technicians, the Halifax Infirmary ICU staff on 5.2 and the staff on 8.4, Dr. Mary Malebranche, Dr. Patrick Holland; Nurses, Billy, Leo, Hannah, Derrick, Emily, Angel, Pam, and the housekeeping staff. There will be no visitation or service. There will be a gathering of family and friends at a later date. In lieu of flowers, contributions can be made to a charity of choice.