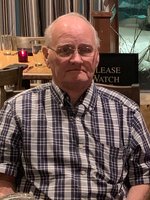 Joseph Aubrey Sampson Dominion Joseph Aubrey Sampson was born November 22, 1948, raised in Dominion, NS and passed away at home peacefully with his family by his side on October 12, 2020. He was the son of the late Fred and Mary (McMullin) Sampson. In Aubrey’s younger years he worked as a cook in the galley of the HMCS Fort Frances and the HMCS Sackville. He then returned home to work at 26’ Colliery and later on at Prince Mine so he could raise his family. After Devco’s closure, he drove taxi in the Glace Bay area for many years. He then stopped working so he could spend more time with Jean. Aubrey is survived by his devoted and loving wife Jean of 50 years and will be deeply missed by sons, Aubrey (Faith) Kingston, NS, Stephen, Dominion and daughter, Susan Gaskell (Neil), Halifax; grandchildren, Kiera, Rayne, baby Ainsley, Lexxi, Chelsey, Skarlett, Andrew, Keegan and Taylor; step grandchildren, Caeden, Brooke,Bailey and Rydan. He is also survived by the last of six brothers, Fred (Barb), Reserve Mines; sister-in-law, Celeste, Victoria, BC; life-long friend, Peggy Stanley, Kitchener, Ont., favorite nephews, Rick Mcintyre, and Derek Sampson; brother-in-law, Gordon McDonald (Laura), Reserve Mines. Other close family and friends; the Campbell sisters, Charlene, Tunny and Cathy, Tammy Nicholson, Kathleen Wilson and cousin Charles (Timmy)Timmons. Besides his parents, Aubrey was predeceased by brothers, Murdock, Harvey (Barb), John and Aldred (Betty) and a sister in infancy. Aubrey was often referred to as ‘A Good Man’, ‘A Great Guy’ or ‘A kind and gentle man who never hurt a soul.’ He was always there to support family and friends. If someone needed shelter, he provided it; if someone needed a grocery order, he would make sure they had it. His generosity had no limits. He was known as Poppy to many children of his extended family. He loved to cook and always would put on a pot of clam chowder for friends and family who would come to visit. But like it or not he was an advocate for Trump and he had no problem telling anyone. We, the family, would like to express our sincere thanks to Palliative Care, VON, nursing staff of the QE11 7C and a special thank you to Dr. Olaide Odumosu. Cremation has taken place. Visitation will take place Friday, October 16, 2020 from 6-8 p.m. at T.J. Tracey Cremation and Burial Specialists, 370 Reserve St., Glace Bay, NS (902-849-4199. A memorial service will be held 1:30 p.m. Saturday, October 17, 2020 in the funeral home chapel with Fr. Norman MacPhee presiding. Expressions of sympathy may be sent to the family by visiting www.tjtracey.com