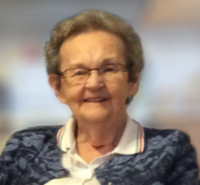 It is with the heaviest of hearts that we announce the passing of our beloved wife, mother, grandmother and great-grandmother, Ruth Rousseau, at the age of 86 on May 7, 2020. She passed away peacefully after a short stay at the Halifax Infirmary. Born in Belleville NS, she was a daughter of Charles and Constance Pottier. Ruth was a long time Sears employee. She was an avid collector and loved going to yard sales searching for brooches and antique frames which she lovingly restored to create beautiful framed works of art that she proudly displayed throughout her home. In her younger years she enjoyed sewing, quilting and tole painting. Her passion was family genealogy and Acadian history. She loved spending time with her family and delighted in visits from her grandchildren and great grandchildren. She is survived by her husband of 65 years, Gilles Rousseau; daughters Pauline (David) Naugler, Yvonne Rousseau, Suzie (Gary) Roberts; sister Janet MacDonald; brothers-in-law Jean-Marie, Jacques and Serge Rousseau; sisters-in-law Pauline Pottier, Jacqueline Selman, Yvette, Yolande and Hugette Rousseau; grandchildren Jason (Danielle) Naugler, Natalie Naugler, Lauren (Jonathan) Perry and Travis Roberts; great-grandchildren Darius, Zoe and Jake; as well as many nieces and nephews. She will be sadly missed by her dear lifelong friend Eileen Pothier. She was predeceased by brothers Richard and Francis Pottier; sister Dorothy Craig; brothers-in-law Jerry MacDonald, Paul-Henri and Claude Rousseau, Alton Craig; sisters-in-law Elaine and Louiselle Rousseau. In honour of Ruth’s wishes there will be no visitation or service.