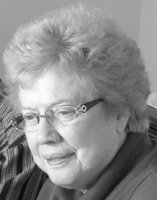 Age 92, passed away peacefully in Halifax, surrounded by family. Born to the late Ward and Eva (Casselman) Whitteker in Winchester Springs, Ontario, Joan grew up in Ottawa where she would meet Raymond Byers, the love of her life. Married in 1953, they raised their young family in the shadow of Mont Saint-Hilaire near Montréal, before ultimately returning to Ray’s home province of Nova Scotia in the ‘70s, settling in Malagash and later Tatamagouche. A homemaker for much of her life, Mom enjoyed dancing and singing (especially old country standards), and she was an excellent bowler. Their later years were spent “running the roads” of rural NS, helping out and singing in the choir at the Malagash United Church, and playing cribbage with their many friends and relatives along the Sunrise Trail. With Dad’s passing in 2017, Mom spent her final years comfortably in Melville Gardens nursing home in Halifax, where she particularly enjoyed the musical entertainment such as “The Bay Boys”. Joan is survived by her sisters Gayle (Robert) Faulkner, Carolyn (Gary) Broughton and Bonny (Allan) Gracey, and sister-in-law Marjorie (Denis) Tinklin; by son David (Catherine Clancey), daughters Karen Byers (Robert Zwicker) and Linda (Jim) Frizzell; and by her seven grandchildren (Joey, Adrian, Joan, Rachel, Jacqueline, Alex and Jessica) and four great-grandchildren (Vanity, Sophie, David, Teddy). She was predeceased by her parents, husband Ray, brothers Ron (Gladys) and Bill (Louise), sisters June (Les) Dunbar and Betty (Ian) McDonald, and sister-in-law Edith (Harry) Whittaker. Mom will always be remembered for her devotion to family and friends, her quiet and kind nature, and her sense of humour. Many thanks to the wonderful staff at Melville Gardens and the IMCU team (7.2) at the QEII Infirmary. Visitation will be 4-6 p.m. Friday, February 14, at T.J. Tracey Cremation and Burial Specialists (71 McQuade Lake Crescent, Halifax)902-835-4212; interment will occur at a later date. In lieu of flowers, donations may be made to a charity of choice.